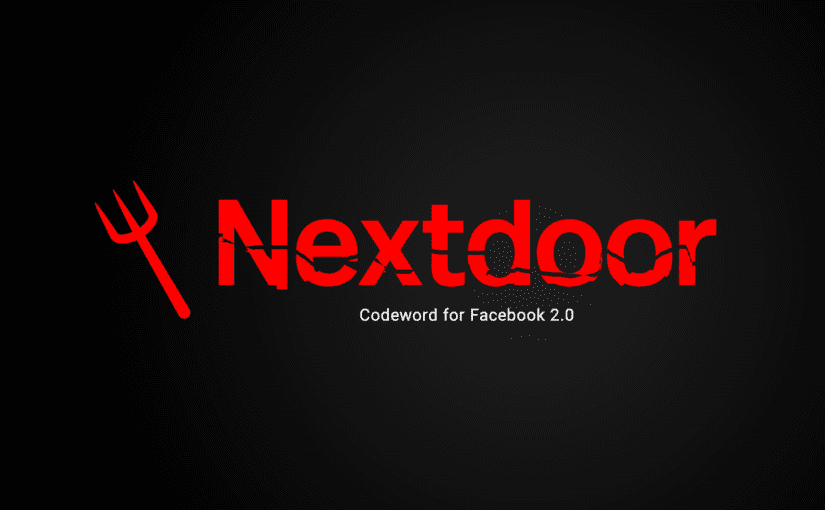 Like any other person, at first, I was intrigued by the idea of getting to know your neighbor. So I decided to sign up and check out the site nextdoor.com. After a few minutes, I noticed a similar pattern, and no, it was not the complete ripoff of Facebook’s wall design (American “innovation” nowadays). It Was happening everywhere, people ranting, complaining, whining, everyone’s an “expert,” you know, the same mental disease that is rampant across all self-proclaimed “social” networks. This problem got worse during the holidays, the hyper-feminine neighborhood soyboys felt entitled to their ways, and every neighbor had to comply.

During my testing, I began to post random rants and content to test out and study their algorithms’ flagging and censorship mechanics, which ended up basic, mob, or moderator rule. At some point, an appointed neighborhood “Lead” or snitch was introduced as a tertiary mechanism. As time progressed, the site became a mouthpiece for local governments, mandated posts you can’t comment on, flag, or remove. A Flood of COVID ads everywhere primarily sponsored the local municipalities and shoved down your throat with no way to opt-out. If you asked the wrong questions about COVID or any “sensitive” subject for that matter, you would get a canned notice the next time you log in. The warning was generalized or vague, only highlighting misinformation. If you’d continue, you could safely assume your account would be suspended indefinitely to protect the idiocracy. For me, this was a huge red flag, especially when recognizing the same evolving pattern from Facebook, pretending to be a place for people to meet and have discourse. At the same time, a single narrative is being propagated and used to manipulate behavior, all thanks to their centralized ivory tower.

After a month of being active on the platform, I concluded that Nextdoor is again for the self-absorbed sheep that didn’t learn from Facebook and probably never will. Plain and simple, the platform presents a clear and present danger to any country that uses it. Why would I say that? Because they mimic Facebook in every way, except their local content/data is more accurate. Nextdoor is also much better at staying under the radar while being more aggressive; they have quietly mapped out all US communities or countries with access. They then give or sell unknown access to the highest bidder, which could then monitor the local community’s opinions, sentiment, dissent. They can use various datasets from others users to create algorithms to find patterns within their ecosystem. That data can then be weaponized to identify a specific category, people, targets, or forecast behavior. As with Facebook, the possibilities are endless.

Before deactivating my test account, I requested a copy of my user dataset. After a few minutes, I had a nice zip file with my partial history in various .csv files:

When I had the chance, I did not use their app as the permissions it was asking for were ridiculous and out of context of what would be necessary to interact with the platform. In other words, it was invasive privacy-wise. If I had used their app, I would probably have another file called Tracking with a log of geolocations pings, unless, of course, that is part of what you don’t get to see. For your safety, of course…

The Danger Of A Malicious User Or State-Actor

During my time testing the platform with a fake account, I built a simple python script that would scrape the entire neighborhood. After only a few hours, I was able to :

With more time, and a little ML, the possibilities would have been endless. Map, identify, correlate, you name it. My advice is to stay off any social network that is not decentralized, period, or be ready to have your profile open-sourced to the highest bidder.